WordPress Developer Salary: The Average, Plus How to Increase Yours

Salary might be a taboo subject to some people, but if you’re a WordPress developer, or are considering a career in WordPress development, knowing what people are earning is essential to maximizing your own earning power.

To do the topic full justice, we’re going to break this post into two parts.

First, we’ll take a look at the data from job sites and freelancing platforms to learn:

Then, after we’ve covered what the averages are, we’ll discuss some tips for increasing your own salary so that you can move yourself towards the right side of the salary bell curve.

But first, a little caveat…

There are a few things that can skew these numbers. First, because WordPress is so popular (currently powering over 32% of the web), there are a ton of people who might fall under the label of “WordPress developer”.

For example, there’s the distinction between WordPress “developers” and “implementers”.

Developers are the ones working directly with code and building solutions, while implementers are more about taking those solutions and turning them into websites for clients.

But to a lot of people, they both count as “WordPress developers”, especially when it comes to freelancing.

Then, to complicate things further, you have the global nature of WordPress. There are developers and freelancers all around the world, which means that geography is going to play a big role in the averages, especially when it comes to freelance rates.

Basically, there’s a lot of stuff that can skew the averages, so keep that in mind when you’re looking at the data.

What the Job Sites Say About the Average WordPress Developer Salary

For all these sites, we’re using the entire United States for the average. Obviously, other countries, or even specific US states, will vary from this average:

Put those numbers together, and you get an average salary of $63,348 for full-time WordPress developers in the United States as a whole.

What The Data Says About WordPress Developer Freelance Rates

A lot of WordPress developers are freelancers, not full-time employees.

Unlike the full-time salaries, there’s not necessarily one single average here. Instead, we’ll find the range of most freelance WordPress developers on each platform.

Also, these numbers are global, as most freelance sites have tons of freelancers from all around the world.

Anyone can sign up and there’s not really any vetting process for who is able to call themselves a WordPress developer.

We have two data points here…

First, according to an article from Upwork, the average freelance WordPress developer on their platform charges anywhere from $20-$100.

Second, we took a look at People Per Hour, which offers a helpful breakdown of freelancers by the rates that they charge: 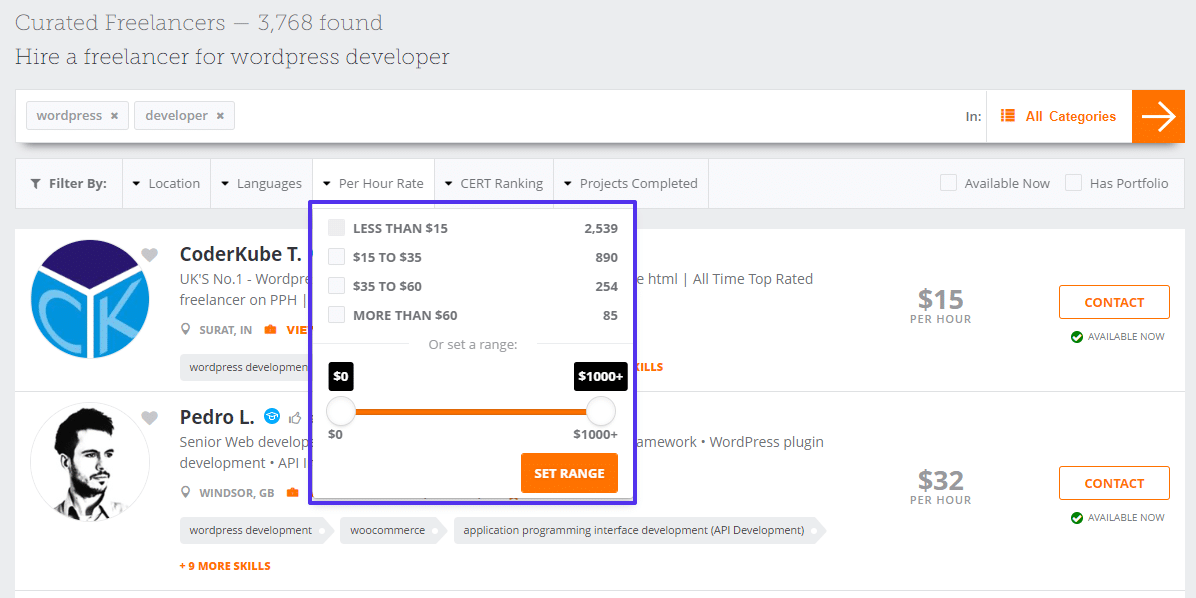 Of the 3,768 freelancers who show up for a “WordPress developer” keyword search, here’s the rate breakdown:

Unlike the open nature of Upwork or People Per Hour, these marketplaces require testing before freelancers are allowed to start looking for work.

As a result, they’re harder to get into. But if you make it through the tests, the rates look a lot better.

First, there’s Codeable. The absolute minimum rate that you’ll get on Codeable is $60 per hour. And Codeable says that their rates usually run $60 to $90 per hour.

Second, there’s CodementorX, where the average and median WordPress developer hourly rate is $61 to $80 per hour globally:

Or, if you limit the search to just North America, the mean becomes $81 to $100 per hour (you can see an uptick in people charging $141+ which brings the average up): 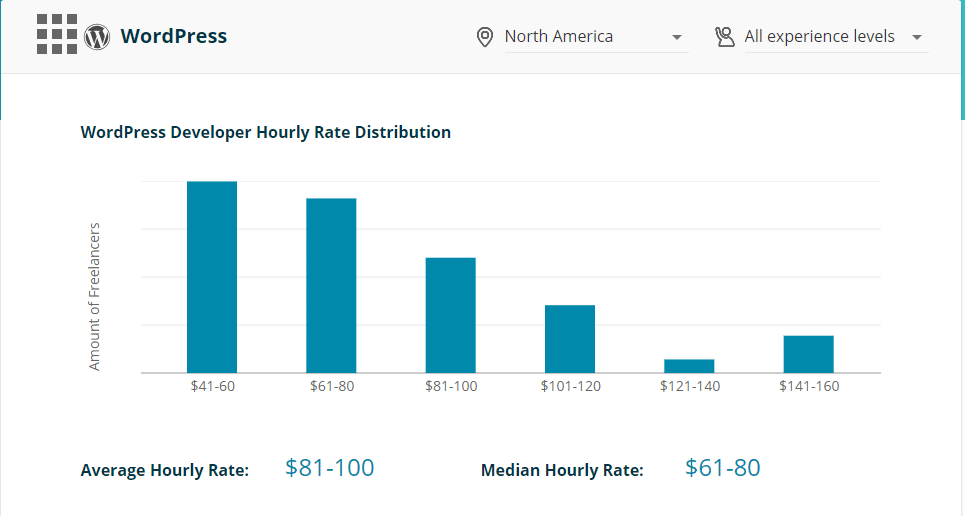 Here’s a sad truth about these salary numbers:

Of developers for the major open-source content management platforms (or web dev in general), WordPress developers are often at the bottom.

So how bad is the difference? Here are some rapid-fire numbers for Drupal and Joomla developers.

And the Drupal developer freelance rates at People Per Hour are:

And the Joomla developer freelance rates at People Per Hour are:

Tom McFarlin has a good post investigating some of the reasons why WordPress developers might earn less than their Drupal or Joomla counterparts.

How to Increase Your Earning Power as a WordPress Developer

Ok, so now you know what other people are getting paid. But knowing other people’s salaries isn’t going to put more bread on your table!

So how can you increase the amount of money that you earn as a WordPress developer?

Whether you’re below the average or already doing well for yourself, here are some tips to increase how much you earn as a WordPress developer.

Note – these tips are focused mainly on freelancing, as your options are a little more limited with full-time employment.

Yes, this seems like kind of a no-brainer. But it’s good to have a reminder because sometimes it’s easy to get set in your ways or feel like you’ll lose all of your clients if you raise your rates.

Here are some funny things about raising your rates, though:

First, you’d be surprised by what people are willing to pay (you just have to ask!).

Second, clients who are willing to pay more are usually easier to work with.

But, as anyone who’s moved up the pay scale can tell you, higher-paying clients are usually much easier to work with.

You can do this systematically:

To make your prices easier for clients to swallow, focus on the value you bring, not the price. That’s always a good rule for marketing yourself in any type of freelance business.

2. Become a Specialist in a Specific Area of WordPress

One of the best ways to raise your rates is to become a specialist in some specific area of WordPress. Instead of being a “WordPress developer”, be a “WooCommerce developer” or a “membership site expert”.

Yes – you shrink your pool of potential clients by doing this. But you also make it a lot easier to market yourself and command higher rates.

Plus, WordPress is popular enough that there’s still plenty of work to go around even if you “niche down”.

3. Get Paid for What You’re Already Doing via Affiliate Partnerships

If you’re building WordPress sites for clients, you need a place to host those sites. And that choice opens up another income opportunity in the form of affiliate partnerships.

That helps you build long-term recurring revenue without adding any work. Not a bad way to up the average hourly rate, right?

Of course, you always want to do right by your client and be transparent about your recommendations. To make sure you can do that, we’ve built Host SEO to be a hosting product that you can be proud to recommend to your clients.

Beyond affiliate income, another way to generate recurring revenue is to offer long-term maintenance plans to your clients.

Again, once you build a site for a client, someone needs to maintain that site going forward. Why not you?

That gives you monthly revenue coming in. And thanks to tools like ManageWP, maintaining a fleet of client sites doesn’t have to be a major time sink.

Or, if you don’t like the idea of doing the maintenance yourself, there are WordPress maintenance services out there that you can either:

For example, if you’re already hosting your client’s site with Host SEO, you can take advantage of our partnership with SkyrocketWP to offer them an affordable ongoing maintenance plan (and get a commission for the referral).

Or, something like WP Buffs offers true white-labeling with an ongoing commission.

5. Choose a Quality Marketplace (and Avoid a Race to the Bottom)

The general freelance marketplaces are often a race to the bottom when it comes to price. That’s made worse because many of the people posting jobs there are looking for rock-bottom prices. Basically, the quality of the client leads just isn’t good most of the time.

Instead, skip the general marketplaces and either go solo or use a specialized marketplace like Codeable.

While you will need to prove your chops to get into Codeable, the upshot is that Codeable is basically pre-vetting all of your leads for you.

See, Codeable is transparent about the fact that their minimum is $60 per hour which will automatically weed out all the low-quality leads who are looking for someone with rock-bottom pricing.

So if someone is looking for a WordPress freelancer on Codeable, you already know they’re happy to pay at least $60 per hour. And that means you can compete on quality and service, which is a much more sustainable way to run your business.

6. Work On Your Communication

You could be the best WordPress developer on the planet, but if you can’t communicate effectively, you’re going to fall short. Developers need to be able toclearly explain projects to clients in a simplified way that they can understand. Remember, most clients aren’t that tech savvy, and is why they’re hiring a developer in the first place.

A developer should also take the time to learn the language. Whether this is English, Spanish, etc. Language barriers can cause delays, frustration, and leave the client unsatisfied. And yes, this means proofreading and double-checking your emails before sending them out. Typos and bad grammar are simply unprofessional. If you need to, use a free tool like Grammarly or Hemingway to help.

The secret killer of every freelance business that nobody talks about… and that is taxes. In the United States, if you’re a salaried WordPress developer, then most likely your employer is withholding a bulk of your taxes behind the scenes. But if you’re doing WordPress freelance gigs, as a sole proprietorship, this means you have to pay self-employment taxes.

Self-employed individuals have to pay both the Social Security and Medicare for the employer and for the business. Here is a rough breakdown of self-employment tax in 2018, which is around 15.3% (source):

As you can see, it’s almost like getting double taxed, because as a freelancer you are both the employee and the business. 😭While this doesn’t seem fair, it’s how the system is set up.

This is why we highly recommend all freelancers talk with a tax accountant. Sometimes settings up an LLC or S Corporation can save you thousands of dollars a year in taxes! There are companies like Independent Contractor Tax Advisors who deal solely with helping self-employed individuals save money on taxes.

Are WordPress Developers Fairly Paid – What Do You Think?

Now that you’ve seen the data, we’d love to hear from you!

Do these average salaries match your experience? And do you think WordPress developers are fairly paid in comparison to web developers as a whole? Let us know in the comments!