Apache and Nginx are two of the most popular open source web servers across the globe. As a matter of fact, 50% of the websites in the world are using them as web servers. The servers are designed to handle diverse traffic load without succumbing to problems with heavy server loads, and it is this sustainable feature that makes both of them favorite for large-scale websites. These web servers support various technologies, but the most common ones are PHP applications. Considering that your website will get or already gets too much daily traffic and you are confused whether to choose Apache or Nginx with PHP-FPM as your web server, the following guide will help you immensely.

In case of a PHP-based website receiving heavy daily traffic, it needs a fast processing manager so that handling the requests from the users can be robust and server at a higher speed. To enhance this performance, PHP-FPM has become popular. FPM stands for FastCGI Process Manager. It performs various vital functions such as managing processes in an advanced way for faster output, restart a process in case of cache destruction, accelerate data flushing while processing time-consuming process and many such functions that will impact the processing of requests and processes positively. Adding PHP-FPM to the web server has become a norm to avail the faster processing feature whether it is Apache or Nginx server. After adding PHP-FPM, most of the users want to know which of the web servers performs better.

There are basically two types of contents applicable in the web application. One is static content that stays the same throughout the lifetime of the website session and then there is dynamic content that keeps on changing based on various triggers. The performance of the web servers varies a lot based on this content type.

Coming to Nginx, Nginx lacks the ability to handle dynamic content internally. It uses an external processor for such execution and there is going to be a waiting period for sending requests to external processors and getting responses which slow down the performance significantly. Configuring the communication between Nginx and external processor can also get complicated at times especially when there are too many web traffics on the application. It is somewhat a benefit in disguise. This enables Nginx to handle static content at a faster rate internally.

Verdict – If you have a web application that has more dynamic content, go for Apache. If the static content is more, Nginx is the best option. 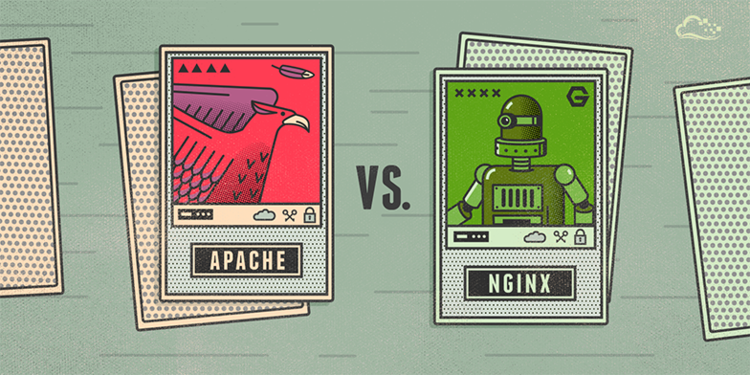 The reason why Apache is considered to be slower than Nginx in most of the cases is its repetitive configuration. Apache checks .htaccess file resides within the content directories. This helps in decentralized configuration but processing requests take a lot more time than it is the case with Nginx. Interpreting .htacceess file each time it is found on the request path is an old concept. This is more useful in content management systems or in shared hosting to allow non-privileged users to control certain aspects without full control over configuration file. Nginx, on the other hand, checks .htaccess files only on the parent directories and hence, the requests can be served faster.

Verdict – Unless you have a website or web application where you need to give non-privilege users certain controls, you should always go for Nginx otherwise.

Since most part of a website is having static content and most of the media files are actually static content of a web application, people always find Nginx providing higher speed than Apache. That is why over the years, so many website owners have switched from Apache + PHP-FPM to Nginx + PHP-FPM and got better performance while handling huge traffic. But if you have a website where there is more dynamic content and PHP has to do most of the work rather than web server having to do more work as is the case with the static content website, Apache will always deliver a faster performance.